First of all, I give thanks for Jen's buddy Hallie Lord finally going into labour x days overdue with baby number 6. I happened to be up doing a night feed, so even though things seemed to kick off at a sensible hour of the day in the USA, in the UK I was able to learn about developments from Twitter, & offer up prayers. I'm a little disappointed there's no live home birth live tweet system in operation, but quite understand other things take priority....(Jennifer Fulwiler! What are you thinking not keeping us informed every second minute!!!)

And now let's give thanks for our own little bundle of joy, 4thChild/4thSister Josephine Alice, our teeniest so far at 6lb 11oz, who arrived early (38+3) like my last two have (Hallie must have been going insane being overdue) after a week of prodomal labour and my waters breaking, but nothing at all happening cervix-wise (TMI for some of you, sorry!). Due to 2 previous C-Sections and carrying Group B Strep the midwives & obstetricians were keen to a) get baby out fairly soon, and b) avoid induction by synthetic hormones, as it would possibly cause damage to my uterus/existing scar tissue. So although I would have been happy to labour, rather than have the caesarean I'd booked in for, we opted for the C-Section for safety's sake - and to be honest, after a week of getting no sleep from contractions that kept me awake even though I wasn't dilating at all, my body was possibly too exhausted to perform another VBAC this time. Anyway, welcome, baby Josephine!: 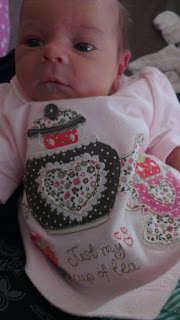 About the surgery itself, I offer up huge thanks. I was petrified for a short time, tearfully thinking about the existing 3Sisters and my time on this earth (yes, things like this go through my mind every pregnancy, I guess I'm only human, Lord, being unable to wholly trust.) But as I sat with open hands, having the spinal anaesthetic administered, the crazy-busy room became a little haven of peace. God was there, He had gifted all the hospital staff with the skills they needed to make things go smoothly, and had even provided me with a team of 3 geeky anaesthetists who used me as a test subject in a side-project they were doing about blood pressure during surgery and kept me calm (ish.)

I also give thanks that this was birth number four, and C-Section number three, and I had enough previous experience of hospitals and post-operative life to know how to take care of Josephine and I. For example: take whatever food and drink was offered, keep putting baby to the breast even though my milk wasn't in and she was clearly frustrated, and ask for assistance wherever necessary. On a ward with three other bays, separated only by curtains, having to listen to the problems two first-time mums were having caring for their babies and themselves (who would refuse food?! even hospital food?! when in recovery?!!), beating themselves up with their feeding struggles, I felt by Day 3 I could happily go insane. If I had to hear the woman in the bay next to me moan to medical staff about how she desperately missed her 'other half' again I may not have been responsible for my actions ('cause I never missed mine or my THREE EXISTING CHILDREN. Meh.) Happily, I am going to write a satire about it, and we'll retire from the proceeds. (More gratefulness.) 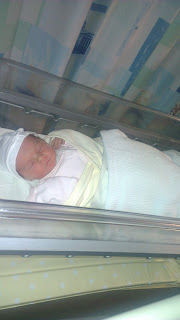 separated only by curtains...

I also give thanks that I've been able to sit and feed and cuddle the other kids a bit, and eat and drink and try and achieve general wellness, as my husband takes time off work and looks after the other three. He has been an absolute hero during the past ten days, and I've told him so [in between the sleep deprived snarking and hormonal explosions :-) ]


We've also used our support network of family and friends to ensure that - pretty much in rotation - the 3Sisters get to visit other people and do other stuff, maybe with Daddy, or just hang at home. They aren't having the wildest Easter holidays in the world, but they've done cinema, McDonalds and the park. All without me taking them!

And finally, I give thanks that we're able to have kids at all. I may never finish my post in progress on faith and fertility, but I've mentioned before that as a couple we have 'fertility issues' and medical experts did not expect us to conceive even one child without assistance. We pretty much left it up to destiny (which I later learned to recognise as God) and have been blessed with four daughters. I also believe that He is working hard in the lives of those friends of mine who have been trying for years to have children, even when they have stopped believing so. It's been difficult thinking about them at this time. Posting joyfully about Joeybaba on Facebook & Twitter is all well and good, but I know there are at least a couple of people who will feel sad when they learn of 4thSister's arrival (and, because they are human, perhaps jealous, angry or bitter), just like I was in the days prior to social media when I saw mums with their babies when out shopping and felt like I'd been punched in the gut because it wasn't me. It's so hard to hold onto hope when desperate to have a baby, and I give thanks for anyone who can help these people right now, and provide them with the love, support & healing that they need. Amen.

* with thanks to Jen Fulwiler @ ConversionDiary.com for hosting - head over there now and read a whole load of other Quick Takes!
Posted by Natasha at 12:54:00 pm