7 Quick Takes: The Michaelmas (or I love Autumn) Edition! I'm very excited because it's been Michaelmas this week. It is only recently after all that I discovered its full meaning and that it gives me an excuse to put blackberries and orchard fruits into a cake or pie. And squash and pumpkin are in season! And spiced pumpkin lattes! (not that I have had one yet.) Coupled with the fact that I missed the first few weeks of 'back to school' due to surgery is the exciting feeling I get with Autumn mists in the air, seasonal foods to cook with and Harvest Supper approaching! I was lucky enough to attend a Holy Communion service on the feast of St Michael & the Archangels itself, and share coffee and a Belgian bun at home with a new friend afterwards. I was wiped out, mentally and physically, afterwards, but it was worth the effort. Our priest has been on a missional trip in India, I didn't want to trouble the curate to minister the Eucharist to me at home again, so even though I sat down for everything but the Gospel reading & the Creed, receiving the Lord's Supper on that special day was amazing!!! (And so was the Belgian bun. Ahem.) (Edited to add - later in the week, another friend came round with Belgian buns. How blessed am I?!)


I am also extra excited because when I visited the hosting site for 7 Quick Takes today, I found out it is anniversary time! (I will stop the exclamations at some point. Promise.) Can you believe it, 7 Quick Takes has been going for 7 years. How special is that? Kelly is running a special Link-tober fest with a competition and everything, and encouraging those of you who haven't posted for a while to post. Before I was at Strength and Song, I blogged at Musings on Motherhood and Ministry and posted my first Quick Take approximately five years ago. Coupled with the Autumn-ness of everything I've gone all reflective and spent half an hour looking back to this time in 2010. (You can tell no children are home.) It will have to be a whole other post though. Definitely not a Quick Take (although I don't think mine have ever been very quick!)

3: All about that squash (and pumpkin!)

I am purposefully making my blog posts more about food, but believe me it's also just ON MY MIND. Partly it's because it took me a while post-surgery to get back into eating, preparing and enjoying food again. But it's also due to me trying to cut out the processed stuff and eat foods that make me feel well, and make me well. Last week I baked rye bread, made squash soup from bone broth and had berries from the freezer with plain yogurt. Although I missed out on brambling in our amazing English countryside, blackberries are going to be delivered today, so I will finally be making my Michaelmas cake - which this year is likely going to take the form of a pear and blackberry crumble, possibly made with maple syrup and oats instead of a traditional wheat flour and sugar topping. Nom nom! The connection between food and spirituality becomes so wonderfully and increasingly evident on so many levels the more I delve into it. Thankfully (and even the name of blog is to do with Michaelmas!) Haley, amongst others, has a fabulous blog which provides a wealth of ideas of what to put on the table. It's a great way to connect with the liturgical calendar, as was Bonnie's recent post on Living Liturgically in October. Oh, and, by the way, instead of faffing around trying to make a proper USA pumpkin pie from scratch, I found out that the new supermarket  I use imports Libby's pumpkin puree, so we even get a proper shot at Thanksgiving. (NB - I aware that Thanksgiving is Not a Liturgical Festival. As such. As far as I know.)

I am (unsurprisingly given my current food obsession) looking forward to our imminent fish and chip supper at Harvest Festival, not least because I have been out of the church loop for almost a month now and I miss the fellowship. This week I lovingly prepared apples, cinnamon and sugar and topped them with crumble.

Some of them had fallen from my mother in law's apple tree. They are not the only windfalls I have been blessed with. As well as being held in prayer recently I may have kept visitors to a minimum but cards were very much appreciated and a few people gave me flowers. I'm so very thankful. (The ones below just shout "autumn" at me!) 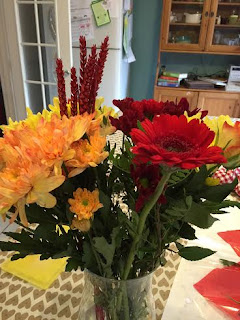 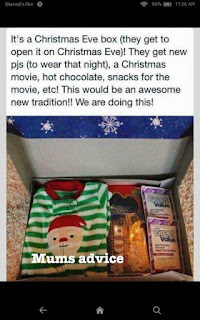 Having said that I am loving Autumn, let's fast forward to Christmas temporarily. (Yes, really!) (Sorry!) There is a photo doing the rounds on Facebook that a few people have liked, featuring a Christmas gift box of pyjamas and other bits and bobs. Very cute. But, bang on-trend as I so frequently am (not), for once I am thankful to have been doing Christmas pyjamas as a tradition for a few years now - and that I have purchased this year's onesies! Because I've been putting money aside throughout the year we have also stretched to buying robes for them. And all have been washed in the special anti-allergy washing liquid we use for the kids and been line dried and boxed away for Christmas Eve. WIN. 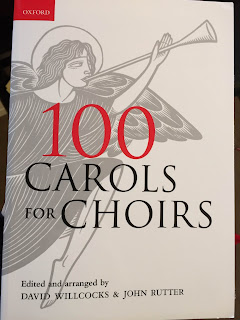 Oh, and did I mention this?! I won't be participating in our choir Christmas concert this year, as I've missed (and will continue to miss) too many rehearsals to do the pieces justice. But I will be singing Christmas carols with choir in the local community as often as I can. And my friend dropped round my new book after she had been to choir rehearsal on Wednesday. (And also - it's time for me to make my Christmas cake....sssssh.....)

OK, OK, I know it's not time for Christmas. Because it has been Michaelmas, did I mention? It is Autumn. FirstSister turned eleven yesterday. It is Nottingham Goose Fair weekend. And for dinner last night we had (organic gluten-free but I wouldn't recommend them) pork sausages with mashed potato and red cabbage braised with red wine vinegar, orange juice, orange zest, ground allspice, sliced apple and finely chopped ginger. AUTUMN. BRING IT ON. (Did I mention pumpkin spiced lattes....?)


Write and post your own 7 Quick Takes and reminisce over the past 7 years of posts over at This Ain't the Lyceum.